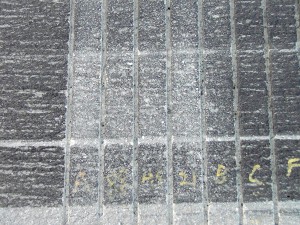 The title compounds were tested on a single-strike stripe at Pope AAF on 5/23/12, with one 10-
minute exposure followed by a 20-count scrub with a rollered brush then rinsing/patting dry, then

a 15-minute exposure and repeated brushing/rinsing. The spot was then blown dry, and pictures
taken with no flash at approximately 6:15 AM using natural light and an ASA-400 exposure
using a Toshiba PDR digital camera. This was “Test II”.

The picture was then analyzed using Image J freeware, using a 4-sided figure (same one for all).
The histograms were integrated – 0-200 was considered “black”, and 201-255 was considered
“white”. The “absolute” clean was simply the white count divided by the total, and the relative
clean was the absolute clean of each spot divided by the absolute clean of the highest-cleanliness spot, in this case Avion 50. The results are tabulated below with the picture attached.