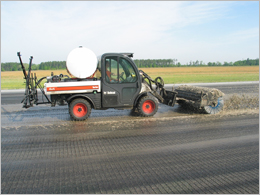 The article below is from the Federal Laboratory Consortium and discusses the development of the miniaturized rubber removal package designed by Engineers with the Air Force Research Laboratory’s Materials and Manufacturing Directorate Airbase Technologies Division at Tyndall Air Force Base. This system was designed to use Avion 50 detergent manufactured by Chemtek, Inc.

[pullquote align=”right” type=”simple”]The engineers decided to continue to use Avion 50 detergent by Chemtek, Inc., as the standard detergent for cleaning the runways.[/pullquote]

Engineers with the Air Force Research Laboratory’s Materials and Manufacturing Directorate (AFRL/ML) Airbase Technologies Division, at Tyndall AFB, Fla., developed a miniaturized, easily portable and multi-use system to remove runway rubber. Use of this system will ensure that runways are kept free of rubber and are safe for aircraft landings.

The development of this new system provides a highly effective and easily transportable solution to runway rubber removal. The system’s removal capability exceeds Air Force standards and provides a safe, ready-to-use runway. The system also has the potential to be a multi-use system for runway repair as well.

During aircraft landing, prior to the actual touchdown, the tires are at rest, experiencing no rotation. At the point of impact with the asphalt, the aircraft is moving at a speed of 100 knots (115 miles per hour), so the tires must reach a rotational speed to match the aircraft speed in a very short amount of time.

This causes superheating of the tires, as well as skidding, which leaves rubber deposits on the runway. The tires also leave rubber deposits while braking when the aircraft is coming to a stop after touching down. Rubber buildup on a runway is very dangerous because during wet weather conditions it creates a significant risk for incoming aircraft to slip off the runway while braking.

Currently, the most common method of cleaning rubber off of Air Force runways is the use of detergent cleaners. The size of the equipment it takes to apply detergent cleaners to the runways has increasingly become a problem because it currently takes two C-17 aircraft to deliver a runway cleaning system to its intended destination.

This has had a noticeable impact during Operation Enduring Freedom because the aircraft used to transport the system have other missions to provide support to the operation and to military personnel.

Engineers at ML were tasked with providing a miniaturized rubber removal system that wouldn’t require more than one aircraft to transport it. The engineers had four main goals: determine the equipment that would be the most successful in removing the rubber while maintaining low weight, identify other possible uses for the equipment if it is successful in removing the rubber, assemble a package for testing on Air Force runways, and test the equipment on both asphalt concrete and Portland cement concrete runways.

The engineers decided to continue to use Avion 50 detergent by Chemtek, Inc., as the standard detergent for cleaning the runways. Once that decision was made, they began looking at possible components to make the new system.

The engineers created a system that had two primary pieces of equipment: a Bobcat Toolcat with a broom and skidloaded spray attachment as the main vehicle and a PBM Supply & Manufacturing nurse trailer with dust control spray nozzles that provides water during the cleaning if a water vehicle isn’t available. The system also included secondary equipment as well: pumps to disperse the detergent and the water, a detergent applicator, and a water applicator to keep the runway damp during agitation.

Modifications were made to the components so that the system would perform as needed.

The broom was loaded with a combination of steel and poly bristles, which increases the movement of the water while the steel brushes scrub the runway.

The technicians started the removal process by applying the Avion 50 detergent to the runway at a rate of 55 gallons per 10,000 square feet. After the detergent was applied, they used the broom to agitate the detergent for 2.5 hours, while keeping the area damp. A significant amount of water was then added to get the detergent to foam, and agitation was continued for 30 minutes. This caused the rubber particles to be suspended in the foam. The runway was then rinsed for a period of 2.5 hours as the broom was used to move the rubber to the sides of the runway.

After the tests were complete, it was revealed that the new system had exceeded expectations by removing 90 to 95 percent of the rubber on the runways (the Air Force standard is 85 percent). It was also found that in some cases the new system could accomplish the removal in less than the six-hour estimate. In the future the Toolcat could be outfitted with attachments for runway repair, such as a paint stripper, concrete saws, grinders and mixers.

A few minor system tweaks were required but, as a result of the positive testing results, Air Combat Command (ACC) requested that ML engineers put together two systems to turn over to ACC to field.